Series Introduction : WGMG, abbreviates “What Grinds My Gears” (drawing inspiration from Family Guy), a rant venture of mine, where I would take issues that leave me disturbed and wing it with a few wise words, a few angry ones and try to conclude with my sanity and laptop both in one piece.

While the advocate of “better days”, our PM, Mr. Modi tries and pacifies various countries into realising our existence, we need to shed some light on something that’s much more close to home, something huge has happened, something that will change our lives as we know it, Netflix has come to India.

For the benefit of the blissfully ignorant, Netflix is a multinational US-based on-demand internet entertainment provider. They have all sorts of TV dramas, situational comedy shows, soaps, movies, etc. all to your viewing pleasure for a nominal monthly price tag with upgrade options.

And this organisation took a decision to expand it’s territorial coverage to South-East Asia, the bunch of moody countries that would accept anything that’s white with a brazen happiness, quite unbecoming of our conditions. Yes, Netflix hit the Indian scenario in the first week of January 2016. So as you would expect, an average Indian’s Facebook news-feed burst out with constant activity that reiterated “Omg Netflix in India“.

Yes, I get it, we are all excited, now we can all finally stop using torrent websites and start paying for our damn television shows, or that’s what Netflix thought.

Every Indian’s face lit up like a christmas decoration when Netflix added a tiny little twist to the scenario, a free 1 month trial period. This notice on the new user creation interface made us go from this posh pay-per-view user to a signature Indian faster than Mr. Modi could get his next travel ticket. People private messaged each other with the customary “Bhai, Netflix dekh, aa gaya idhar, ab bas 1 mahine maza aayega” (Trans. Bro, check Netflix out, it’s here, now we’d have a month of fun), followed by the awkward, “I might even subscribe, if I like the shows.”

I mean, who are we kidding guys, Netflix requires one major thing, that 90% Indians lack by virtue, good internet.  We can easily guess what most Indians would have experienced a few minutes into the Netflix trial minutes,

Picture Credits : Show and the content owned by Russell Peters

The second thing that Netflix needs is a general mentality that would make it usable. Netflix boasts having many shows that “accommodate and cater to the needs of the masses”. Agreed, it has some amazing shows featured, agreed, it is a one-stop-shop for all television lovers and fans of all us/uk based television series, but isn’t it a bit too late for this?

Consider this situation, I make you, the reader, the owner of a chocolate factory. A few years later, I try to sell you chocolate, but for a price. Now unless I am mentally challenged beyond repair, why would I buy the damn chocolate? Simple supply and demand guys. We have been pampered beyond belief by YouTube and Torrent websites and we just wouldn’t shift tectonically to Netflix so suddenly without an incentive.

I mean the only thing that has radically changed after Netflix got introduced in India would be Google’s Indian search bar now features popular search tag “What is the meaning of Netflix and chill” (nudge nudge wink wink).

Other than that, the social network websites buzzed with activity that featured posts like …

… in twitter and a few other less comical ones in Facebook, and this just is a few out of the many I chanced across and found amusing.

Assuming safe numbers and usage parameters, I designed a graph of probable Netflix usage activity in India in the months to come: 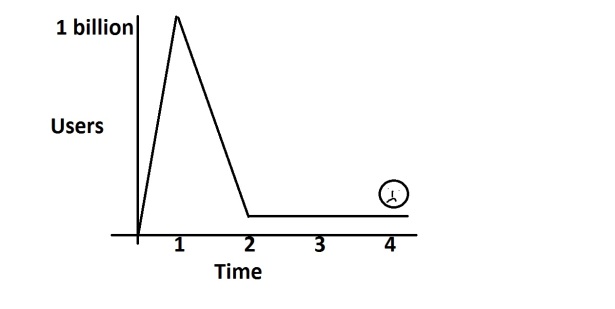 Yes, after one month, the graph would see a drop deeper than the last Sam Smith song you listened to, and anyone who thinks otherwise is grossly overestimating our general readiness towards paying money.

In conclusion, ladies and gentlemen, Netflix is a great service, if you have a few extra bucks and a flair for decent television, and good internet(no,seriously), I’d recommend, go for it. But if you are not going to avail of its services, not going to even use it past the one month subscription, and are just here to hype the living shit out of yet another white guy’s franchise visiting India, please stop clogging up our news feed, I’d rather watch the “You wouldn’t believe what happens next” videos than read another “OMG Netflix in India” post, and I can not believe I just said that. To end this account, I’ll sign off with this picture that answers all your questions.

One thought on “WGMG – Netflix Hype”