As the nation widens its spectrum, becomes more technologically and philosophically adept, it starts relying on its youth (not talking about Rahul Gandhi here), it starts counting on the decisions of the youth, the nation breathes what they breathe, and quite sadly, I’d add, our youth are impressionable babies high on meth.

As the topic suggests, this is a rant on Free Basics and how asinine the concept is. But before that, I’d explain briefly what it is about. Free Basics is an initiative spearheaded by Mark Zuckerberg (a.k.a. the white guy that hugged Modi Ji) and Facebook that ties them up with telecom companies to provide free internet for specific apps and services that sign up to the program, i.e. Facebook, WhatsApp, Twitter and a few other selected sites.

Many people among our so-called-youth are supporting this notion, in fact so much so that, every god-damned morning, I wake up to this.

And also, a great visionary of our time, a man that is the poster-boy of everything that’s going right in India has a few words to say about this,

Oh, and later on in the post he proceeds to explain like the true underage optimist he is. The very fact that he’s for it, should probably turn half the sensible people against it, but hey, who is counting.

For every ten people connected to the internet, roughly one is lifted out of poverty

and later in the discussion he went on to explain how a farmer in Maharashtra benefits from this. But I have a doubt, does free internet (specifically social media giants and other things that are pointless to 7/10 people in India) ensure food on the table? Does it ensure you have a roof atop you? Clothes to adorn?  No, I’m sorry, it doesn’t. I am an engineer and up until my third year my father was convinced that I never needed Internet, and I can’t say I disagree. Internet is overrated for the most part, ironic that I say this on a blog, but it’s the hard truth. People survived with books guys, it’s not impossible. Then there is this misleading ad in the Times of India,

The Facebook descriptive page on Free Basics is written in words that a techie would understand, but would a guy who has limited computer knowledge understand? No he wouldn’t. He would voice his opinions, by basically copying what others have to say, and that’s where we are going wrong. Many people propogate the concept of Free Basics whereas it actually robs us of some of the basic necessities of computing (Javascript sobriety, Https and general god-damned privacy).

This reminds me of a study that I read about a few months back. This study basically explains the mob attitude that people have that basically sums up to “sab kar rahe hai, acha hi hoga” (trans: if everyone’s doing it, it has to be good). No guys, this isn’t yoga, this isn’t planting trees, if everyone is casually voting for it, does not mean it is good, open your eyes, read things as they are. Decide for yourself, don’t rob yourselves of your rights. Stop thinking like a generic Indian and don’t go with the “omg it’s free, let’s vote for it, muft me milega” attitude. As someone clever once said

All that glitters is not gold

After reading and figuring out the corporate red tapes in place, if any of you still think it is a good idea, who am I to stop you?

For all people forming their opinions, I again remind you guys by taking a page out of a fairy tale, 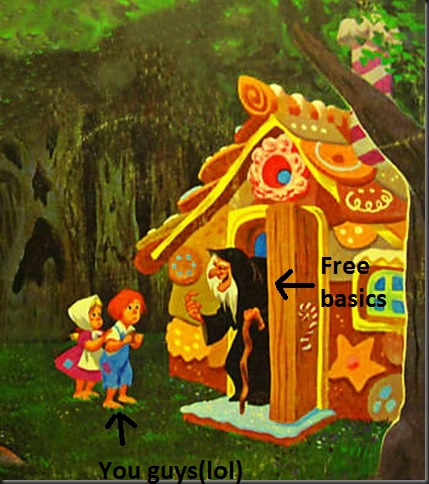 Please make sure you do not get entrapped like the good ol’ Hansel and Gretel because unlike them, you can not kill Facebook, it’s quite impossible.

I would like to conclude by saying, make your choices well, think hard, work the options out and see through the corporate mumbo-jumbo that hides the truth. I leave you with something that Kurt Cobain once said

The duty of the youth is to challenge corruption.

One thought on “WGMG – Free Basics”